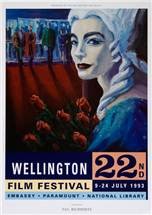 I have so many memories of the NZ International Film Festival. One was, for me, poignant and even – dare I say it – transcendent. It was way back in the late 70s. I can’t remember the exact year, but it was my first film festival and the first film I saw was Andrei Tarkovsky’s Stalker. I’d been brought up largely on Hollywood. Stalker was like nothing I had ever seen before in my life and was my introduction to the myriad of possibilities of what film could also be.

Two other incidents stand out but for less lofty reasons. First was seeing a screening of horror movie Reanimator at the Embassy and the large number in the audience – mainly women – who fled the theatre during a scene involving a decapitated head. The second was during a screening at the Embassy of Reservoir Dogs. As several people walked out during the torture scene, one woman stopped and yelled at the screen as she left. Whether we love films or, occasionally, hate them, it seems that everyone that goes to the festival is at least passionate. Me, I just closed my eyes and waited till the scenes were over.