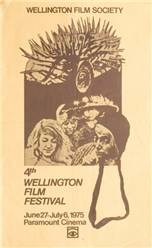 Whenever we drive into a neighbourhood where the locals stare and  wonder what we are up to, we  remember  Paris. Paris, Australia, that is.

It was 1975 ( the 4th Festival and my first) and Peter Weir's creepy, but funny in a weird sort of way The Cars that ate Paris was in good company.   That year we were also scared (and amused) by Servants of the Devil and The Werewolves of Washington but it is The Cars.. that we remember.

Spare parts were the currency of Paris and to help the local economy stray tourists were forced to crash their cars. The doctor turned any unfortunate survivors into pets, called 'Veggies', for the locals while the Town Council carried on with serene dignity. The inevitable clash of Establishment and Rebels was a bloody and glorious mess.  Would it still be as scary or creepy or funny in 2011 or does it deserve its high ranking in the bad movie lists?     We don't want to know. We just enjoy the memories.