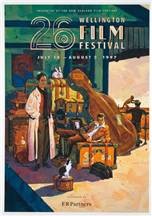 I missed the first two festivals, being at that time located in that unlikely hotbed of cinephilia Madison, Wisconsin, where I gorged myself on four or five movies a day throughout the year. To return to Wellington’s drought was a shock. New Zealand’s film exhibition was at that time totally dominated by the two chains Kerridge Odeon and Amalgamated, who could stymie any potential competition by invoking the protection afforded by an extraordinary piece of legislation, the Cinematograph Films Act 1961. Local cinemagoers were, as I wrote at the time, “deprived of all the bold, imaginative, experimental and disturbing films now emerging from all corners of the world; they must subsist on a babyfood diet of carry on comedies and kung fu epics.” Moreover the censor was hyper-active: in 1974 7% of films submitted to him were banned, and another 38% scissored. In that climate the Wellington Film Festival was exceptionally important, but strangely I have only the vaguest of memories of screenings I attended, and I can’t remember doing any organising at all, even though according to the programme I was on the Festival Committee in 1975. The highlights for me would undoubtedly have been the Fassbinders (The Merchant of Four Seasons and The Bitter Tears of Petra von Kant) at the 3rd Festival and the Wisemans (Primate and Juvenile Court) at the 4th, which also excitingly premiered that very rare phenomenon, a New Zealand feature (Test Pictures). By 1976 I was back in the United States being a perpetual film student again, so once more missed out – but thanks to Lindsay Shelton, two of my apprentice efforts appeared on the programme, whose selection I can only attribute to misplaced loyalty and/or the paucity of product then available. I’m honoured and a little abashed to have made my cinematic debut in the company of Eldar Shengelaya (Oddballs – a film I’ve never seen to this day) and Lina Wertmuller (The Seduction of Mimi).