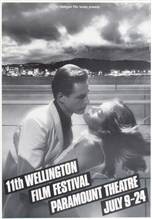 Back then the Committee did it all. My main job was film handling, that is getting film into and out of the Paramount. Sounds straightforward but I soon found it wasn’t. Those 35mm films are HEAVY. Miles of celluloid on heavy steel reels housed in heavy steel cases. As the size of the festival grew the weight, and my task, became heavier and heavier.

Films had to be collected from airline, rail or road freight depots and taken to the Paramount, mainly during working hours. This meant the lunch “hour”. During the festival this routinely became my lunch “two-hour”. My boss knew what was going on but said nothing. We had a silent pact that has never been broken and I regard it as his contribution to the Wellington Film Festival.

Then there was the Censor, Bernie Tunnicliffe back then. Many films were on a tight schedule and on occasions I had to get one to him after working hours, sometimes late at night. He always agreed to view films whatever the time and never, to my recollection, complained. His contribution to the festival. For me it meant getting the heavy boxes to his office and away again, sometimes arriving within minutes of the screening time. We all sweated blood and I sweated sweat as well.

So did my car, a small Morris Marina, in which all films were carried. One of my many enduring memories of the festival is that poor car full of film boxes, rear springs perilously close to the road, struggling up Courtenay Place.