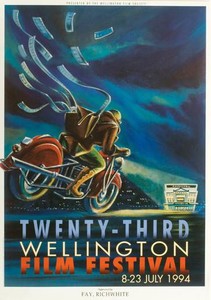 Although I'd been attending the film festival in Auckland since my students days in the early 80s, my real association with it began when I moved to Wellington in 1994 and scored a job as the assistant manager at one of the main festival venues, the Paramount. Those two weeks at the end of July remain my favourite weeks of the year and I could probably write pages, but to keep it somewhere in the vague vicinity of the 200 word brief I thought I'd just list a handful of my favourite memories:

Without question, Shane Meadows' hilarious Q & A after this debut film Where's the Money, Ronnie? (1996). A really nice guy and an extremely talented stand-up comic, apparently.

The lovely man who every year (for as long as I can remember), at about mid point of the festival, turns up with an encouraging word and gourmet chocolates for the weary festival staff.

a) maybe I'm a bit slow, but the realisation that comes at the end of A Pure Formality (1995), was a very affecting cinematic experience for me.

b) the delicious 7 year wait for each instalment of Michael Apted's 7-Up series. Though the last two were a tad dull, I'm hoping for some dramatic mid-life crises by the time they reach 56!

1994, man on motorcycle speeding towards the Embassy (shining in the distance) celluloid streaming disturbingly from his back pack. This was my first year working for the festival, and it was the best ever poster.

a) in the days before the Paramount and Embassy had lifts, I take my hat off to the brave and patient (well, most of them) wheelchair bound patrons who never let the indignity of being carried up the stairs, through a gawking crowd, by young, untrained ushers of varying strength, stop them from getting their annual film festival fix.

b) all of the incredible and dedicated people that I've worked with over the years - from the hard-out regulars (too many to mention, but they know who they are!) to the one-festival wonders from around the world who dropped in for a couple of weeks and made their particular year different and special for us all.