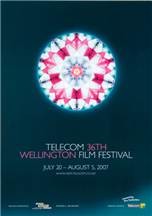 One of my many Wellington Film Festival memories comes from 1985, the first year all films screened at the wonderful Embassy. Following closely on the heels of the Taviani brothers’ ravishing Kaos and completely at the other end of the scale, was Mother’s Meat and Freud’s Flesh, a surreal piece involving a porn star and his domineering mother. It was one of those films where the dialogue gets stuck in your head, and for days after the screening my friend and I would recite scenes between the Esther-mother and her hapless son Lucie/Demira (don’t ask). One of the more bizarre films I ever saw at the festival, but certainly memorable. The only other film credited to the director, Canadian Demetrious Estdelacropolis, was Shirley Pimple in the John Wayne Temple of Doom, made in 2000.