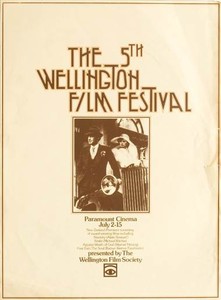 It seems a very long time ago since I attended the 1976 Film Festival and said a few words before the showing of my film, Landfall. I can’t remember what I said, and it doesn’t really matter. I’d made the film before I left the Film Unit to travel around on an Arts Council grant before meeting with the theatre group to perform at a festival in Poland and then tour Poland for a further three weeks. It was quite an amazing experience, which concluded with my returning to New Zealand on election night to witness the victory of Robert Muldoon. That all too brief flowering of the Kirk years, which had seen me able to make a trio of experimental films within the mainstream, was finished, and harder times were ahead. TVNZ, who had paid for Landfall to be made, were now refusing to show it because of operating under a more commercial regime, and I can only be very thankful, both then, and now, that the Festival was there to pick it up. That opportunity to speak, and to show the film, saved it from oblivion. I am sure these sentiments are echoed by a multitude of filmmakers.