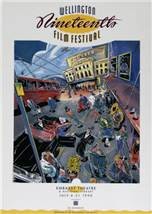 In June 1989 I was employed for a six week contract to work as part of a team of three for the dedicated booking office for the 18th Wellington Film Festival. One of our team didn’t last a fortnight. I became hooked, and have been involved with either the advance bookings, or the venues of the festival since. Little did I realise how addictive it would become. We started with date and time stamping the tickets, seating plans for each session and racks to keep all the tickets in. Heaven help the person who put a row back in the wrong slot. I was surprised to learn that people took annual leave to attend, and there were very specific seat preferences. I liked to excel at seeing this was accommodated as much as possible. Over the years I accumulated a great team that got together each year. The camaraderie that was built up back then lasts to this day both with former staff who became lifetime friends and the film festival attendees that over the years I got to know and is a pleasure to see each year, often not seeing at any other time of the year.