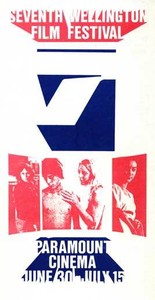 It is hard to believe that the Wellington Film Festival is 40 years young; cinema does not age, it gets stronger, more potent, and the more we discover the masterworks of the past, the undiscovered masterworks of today, the more we learn about ourselves, our culture, and the importance of cinema in our lives.

My favourite reminisce is from the Festival of 1978, when I returned home after eight years living in London, and somehow got myself the job of Film Reviewer for The Evening Post. My brief was to stick to the commercial films, but I stuck my head out good and proper when I saw two extraordinary films in July of that year, that I teamed in one review:

In it were these lines: "Here is a film about interior landscape, of dreams and memories, death and awakening. These reflections presented belong to one woman's creation - and, above all, the film's tense nature holds you close to this beautiful form of madness, that is by its own unrelenting definition one we all must have experienced. All that now remains to be said is that A State of Siege MUST be seen by all who live and care about the nature of our existence in New Zealand."

I was called into the Editor's office, and given a severe reprimand.

He looked very unhappy. My review, the Editor said, was for intellectuals, and I should stick to writing about more populist fare. "Remember, you're writing for the man in the street, Mike," he told me.

Perhaps nothing has changed since then. Film Festivals still have a hard time getting coverage in the last dying rays of tomorrow's fish and chip wrappers. Perhaps we have to thank technology that now we can read excitedly online about the latest Bela Tarr, Cristi Puiu, and Hiroshi Shimizu restoration without the interference of "the man in the street."