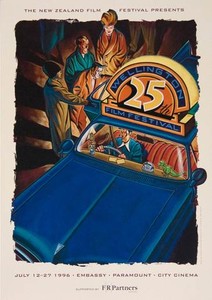 The Embassy matinee festival screening of Lars Von Trier’s Breaking The Waves in cinemascope was held up twice when members of the audience called for help as their partners became unwell, having collapsed in their seats. So I came back to the evening screening in the hope of seeing the film uninterrupted. Instead there were three or four more film stoppages culminating in one person being hospitalised!

The build of tension in the film and in the audience was extraordinary. The harsh story line was offset by sublime scene setting featuring the Scottish highlands and a great soundtrack. But the realism created by the use of the hand held camera and its jerky effect bought on motion sickness for many and this was accentuated on the Embassy’s giant screen. The brain surgery scene had the biggest impact and seemed to trigger the audience reaction. During its season at the Paramount and as the scalpel began to make its incision, folk fled the auditorium in search of the nearest toilet.

To meet Emily Watson and her daughter in search of a toilet at the Warehouse in Kapiti a few summers back was as seemingly random as was what happened when watching her in the film.