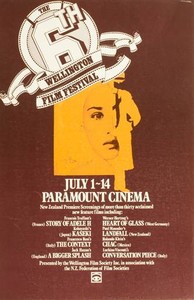 It was 1977. I had just begun my first professional job in the film industry at Pacific Films in Kilbirnie ($90 a week, for all the hours God gave us.). One day in July, I came to work and they said, “We don’t work now – we go to the film festival.” Suddenly, here I was, sitting up the front at the Paramount, paid for a whole fortnight to watch films at the Wellington International Film Festival. I absorbed everything from life changing documentaries, and experimental films to breath taking excursions in international cinema. It turned out that five films a day was for me five times better than one film a day. Bliss. The Festival instantly became my big annual film carnival from then to now. I can’t imagine life without it. In 1985 I got to see my own first feature film, Mr Wrong premiere at the Embassy with sell out mad laughing screaming screenings. I’ve had three features and five documentaries selected over the years all delivered to full houses and to the right adoring audiences. Congratulations to Bill Gosden and the Board for making such a consistently brilliant event happen over such a long time.  Happy Anniversary!