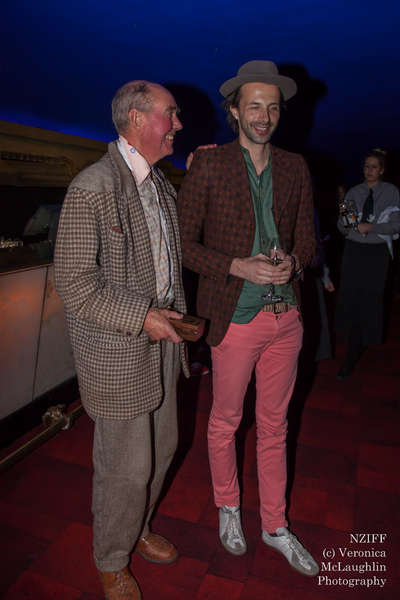 Director Florian Habicht’s relationship with NZIFF began in tears. Seven features later, he has provided some of NZIFF’s most unforgettable nights at the movies.

I was 22 when I submitted my first feature to the New Zealand International Film Festival.

I'd spent two years making the film, and when my dream was shattered by a rejection letter (not email) from the Festival, I shed a lot of tears. It was a very hard rejection to stomach. I didn't give up.

My first feature film in the New Zealand Film Festival! Managed to have a donkey outside the Academy Cinema for the film's world premiere, and we had three extra screenings added to due popular demand. Great success.

The world premiere of Kaikohe Demolition was the moment I became a New Zealander.

Half of Kaikohe was there at the SKYCITY Theatre, the Ratana Brass Band played before the film, and when the film's stars Uncle Bim, Ben Haretuku and John Zielinski spoke afterwards, they had an amazing sense of pride and ownership of the film. Blew me away, and also blew Bill Gosden away (standing next to me on the stage).

Land of the Long White Cloud

The Saturday morning of the film's world premiere, i had a spontaneous idea. To hire a vintage bicycle from First Scene Prop Hire, and make my entrance for my directors introduction by bike.

I got the the cinema at the last minute, and hadn't realized the cinema had stairs! (From memory, it didn't.) I had never ridden a bike down stairs before. Bill Gosden was down on the stage waiting for me. Everyone was waiting. So i rode down a few hundred stairs without falling off! (My parents in the audience watched super worried.) Giving a speech after that was 'kein problem'.

Opening the Film Festival at the mighty Civic was a career highlight for me. One of the first films I ever saw was The Neverending Story, I saw it as a young boy at the Civic. Never dreamed I would be on that screen one day under The Civic stars. And talking to [Love Story’s star] Masha on the phone (in NYC) after the screening, on the stage. Someone from the audience called out “Tell her you love her!”

Rubbings from a Live Man

A documentary performed by Warwick Broadhead, and the only recording of Warwick's theatre of life and art. Warwick and the cast and crew sang 'The Great Pretender' on the stage afterwards, and Warwick received a standing ovation. Miss you Warwick! (One of the last times I saw Warwick, he was my date for the Film Festival's opening night film The Dark Horse.) You can watch Rubbings from a Live Man on my website.

Pulp: a Film about Life, Death and Supermarkets

Having Jarvis talk to the entire Civic via Skype from a room in Iceland, after the screening! Was so intimate, felt like we were all in his bedroom. And strangely he couldn't see us at all. A young woman in the audience apologised to him for pulling his hair and face at one of his New Zealand concerts years ago. Jarvis couldn't remember.

Having my first Haka performed to me and The Civic by zombies and clowns! The after party in The Civic Wintergarden was too hot, and we set off the smoke alarms. The night ended with a few fire trucks and fire men joining the celebration. The film was released theatrically during the New Zealand elections, and not many people saw it after the Festival. At least the election result turned out well!