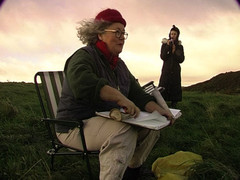 With Allie Eagle and Me in 2004, Briar March was the youngest filmmaker to have had a feature premiere at the Festival. Two years later, attending a Festival screening of a four-hour documentary about children with cancer turned out to be seriously consequential.

In my office there is a box of NZIFF programmes dating back 18 years. I just can't bring myself to throw them out. The programmes are my only record of all the film's I've seen, and also the ones I missed and plan to see later. Each Festival is an event in my year which I make room for. It feels like déjà vu as I stand at the ticket booth outside The Civic circling my choices. I delight in the clickety-clack sounds of my tickets being printed as I wait, hot drink in hand, eavesdropping on what the other attendees are booking.

There are the films that entertain and inspire, and those that take us on a transformative journey. I especially make a point of seeing the later as most often these films don't find a way back to the box office, despite being equally valuable and important. One such documentary is A Lion in the House (2006). Just shy of four hours, the film follows children living with cancer and their families coping with the situation. It's one of those rare cinema experiences where the audience is so emotionally affected by what they see you might consider hugging the stranger sitting next to you at the end of the movie. Albeit a challenging watch, the film gifted me with a sense of empathy and understanding for families in such circumstances. It would be impossible to have this awareness having not ‘experienced’ the documentary. I am reminded about the powerful role cinema can play in our communities and its ability to provide connection.

After the screening I thanked the American filmmakers Julia Reichert and Steven Bognar for their dogged tenacity and courage to make such a work. It was their first time in New Zealand and the following day I offered to take them sight-seeing. As we drove around Auckland, I offhandedly asked them for their recommendations on graduate film programs. They wrote a list of their top five choices on a paper napkin. I put the napkin away in a drawer and forgot about it. Four years later I became more serious about studying in America. It was by chance that I found the napkin again –  after having just been offered a place from the first school on their list! The napkin felt like an affirming message that I should go.

Fast track another two years and I am living in America, having just completed my Masters Degree in Documentary Film at Stanford University. One of my films is nominated for an IDA award and I am sitting in a theatre in Hollywood. Who should be in the seats in front of me but Julia Reichert and Steven Bognar, the filmmakers I met all those years back? I told them about the napkin and how they had in some indirect way inspired my journey to America. A lovely set of serendipitous moments came full circle that evening.

Image: Allie Eagle and Me