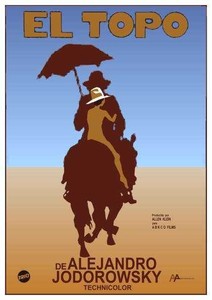 In the early 1970s when I was Chairman of the QEII Arts Council the Mexican Government offered a touring exhibition called “Portrait of Mexico” This exhibition was known to be outstanding. However it carried with it a Mexican Film Festival which we were obliged to take. The Arts Council could not handle the Film Festival itself and we had no way of knowing if it was even any good. I had the bright idea of asking Lindsay Shelton to take it on. The Festival was a huge success, the hit film being Alexander Jodorowsky's El Topo.

So successful was it that extra performances were put on. Another one I recall was a version of the life of Zapata. This had been filmed earlier by Elia Kazan with Marlon Brando in the lead. The Mexican one was just as good. Seeing several Mexican films in a row one noticed that they had some regular extras. When the dust settled after the inevitable explosion there would be several limbless victims who turned up regularly. When our Festival brought back El Topo years later it did not live up to  my earlier memories.